PROOF OF FULL VACCINATION IS REQUIRED FOR ENTRY TO THIS SHOW. NEGATIVE COVID TESTS WILL NOT BE ACCEPTED FOR ENTRY. MASKS ARE ALSO REQUIRED TO BE WORN AT ALL TIMES UNLESS ACTIVELY EATING OR DRINKING. 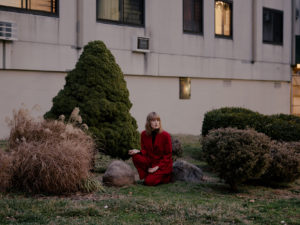 Ignorance, the forthcoming album by the The Weather Station, begins enigmatically; a hissing hi hat, a stuttering drum beat. A full minute passes before the entry of Tamara Lindeman’s voice, gentle, conversational, intoning; “I never believed in the robber”. A jagged music builds, with stabbing strings, saxophone, and several layers of percussion, and the song undulates through five minutes of growing tension, seesawing between just two chords. Once again, Toronto songwriter Tamara Lindeman has remade what The Weather Station sounds like; once again, she has used the occasion of a new record to create a new sonic landscape, tailor-made to express an emotional idea. Ignorance, Lindeman’s debut for Mississippi label Fat Possum Records, is sensuous, ravishing, as hi fi a record as Lindeman has ever made, breaking into pure pop at moments, at others a dense wilderness of notes; a deeply rhythmic, deeply painful record that feels more urgent, more clear than her work ever has.

On the cover, Lindeman lays in the woods, wearing a hand made suit covered in mirrors. She was struck by the compulsion to build a mirror suit on tour one summer, assembling it in a hotel room in PEI and at a friend’s place in Halifax. “I used to be an actor, now I’m a performer” she says. In those roles, she points out, she often finds herself to be the subject of projection, reflecting back the ideas and emotions of others. On the album, she sings of trying to wear the world as a kind of ill fitting, torn garment, dangerously cold; “it does not keep me warm / I cannot ever seem to fasten it” and of walking the streets in it, so disguised, so exposed. Photographed by visual artist Jeff Bierk in midday, the cover purposefully calls to mind Renaissance paintings; with rich blacks and deep colour, and an incongruous blue sky glimpsed through the trees.

The title of the album, Ignorance, feels confrontational, calling to mind perhaps wilful ignorance, but Lindeman insists she meant it in a different context. In 1915 Virginia Woolfe wrote: “the future is dark, which is the best thing a future can be, I think.” Written amidst the brutal first world war, the darkness of the future connoted for Woolfe a not knowing, which by definition holds a sliver of hope; the possibility for something, somewhere, to change. In french, the verb ignorer connotes a humble, unashamed not knowing, and it is this ignorance Lindeman refers to here; the blank space at an intersection of hope and despair, a darkness that does not have to be dark.

Emerging out of Toronto’s vibrant folk scene, Lindeman debuted a moody, introspective sound with her independently released East EP in 2008. Her LP The Line followed in 2009, expanding on an earthy, lyrical style, driven by her distinctive fingerpicked guitar and banjo parts. For the next Weather Station release, Lindeman worked with friend and collaborator Daniel Romano, signing with his You’ve Changed Records label to release the critically acclaimed follow-up, All of It Was Mine, in 2011. Though the album was only released in Canada, it gained wider exposure for the Weather Station, leading to several North American tours with acts like Bahamas, Basia Bulat, and Timber Timbre, as well as a tour of Japan. In addition to collaborative guest appearances on releases by Doug Paisley, Siskiyou, and Field Report, Lindeman earned a SOCAN Songwriting Prize nomination in 2013 for a co-write with Steven Lambke of the Constantines. After the release of 2014’s What Am I Going to Do with Everything I Know EP, she signed with North Carolina label Paradise of Bachelors and traveled to Paris to record her third LP, Loyalty. Loyalty (2015) was the first Weather Station album to receive both American and European release, and consequently became somewhat of a critical breakout album. Lindeman followed up in 2017 with an eponymously titled LP that saw an expansion of the Weather Station sound into more rock-oriented territory. Now in 2020, Lindeman leads us into her brilliant and bold new sound, beginning with the release of ‘Robber’ – an electrifying taste of what to expect on Ignorance, due out February 5th. 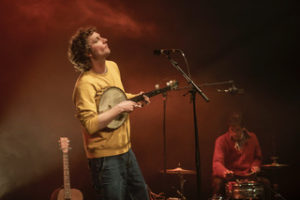 The Following Mountain, Sam Amidon’s sixth album overall and his third for Nonesuch Records, is his first album of original songs. A deeply personal synthesis of folk-based song form and experimental improvisation, it “feels like a liberation” (Uncut) and “provides constant, jolting surprises” (The Guardian). But in his decade-long career as a recording and touring musician, the singer and multi-instrumentalist (banjo, guitar, fiddle) has always managed to create work that’s utterly original, even when, as on previous discs, he was digging through the sounds and stories of traditional American music. The Following Mountain features appearances by musicians such as Shahzad Ismaily, master percussionists Milford Graves and Juma Sultan, and psychedelic jazz musician Sam Gendel.

Prior to The Following Mountain, Amidon released five solo albums on the Bedroom Community and Nonesuch labels. Amidon’s material for these albums consists primarily of reworkings of traditional American ballads, hymns and work songs, with the New York Times writing that Amidon “transforms all of the songs, changing their colors and loading them with trapdoors.” The albums have been deeply collaborative in nature, inviting contributions from musicians such as composer Nico Muhly, guitarist Bill Frisell, producer Thomas Bartlett, and improviser Shahzad Ismaily among others. Amidon has also recorded or performed as a guest artist with groups such as Kronos Quartet, Jason Moran, Bon Iver, Tune-Yards, and Amidon’s wife, the singer-songwriter Beth Orton.

* Postponed from Sunday, June 30th, 2022. All previously purchased tickets will be honored for this date.