Based out of Fort Worth, Texas, The Unlikely Candidates are an indie rock band initially formed as an acoustic duo by childhood friends Kyle Morris and Cole Male in 2008. Eventually expanding the lineup to include guitarist Brenton Carney, bassist Jared Hornbeek, and drummer Kevin Goddard, the band was also able to expand its sound in bigger, more sweeping directions. In 2013, the band signed on with major-label Atlantic and released their debut EP, Follow My Feet. In early 2016, the Unlikely Candidates returned with a hooky new single in “You Love Could Start a War,” which made a strong showing on Billboard’s Alternative Songs chart.

THE ORPHAN THE POET 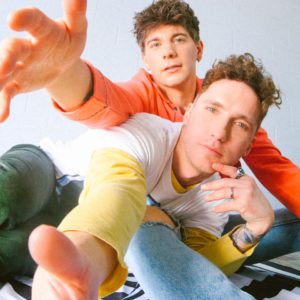 two bff’s making alternative music for u. Based out of Columbus, OH, The Orphan The Poet come bearing their own brand of take-it-or-leave-it alt rock and have been rabidly gaining fans thanks to their captivating live show, while garnering the attention of SiriusXM’s Alt Nation, KROQ, & BBC’s Radio1. With the release of Summer Daze, The Orphan The Poet have found themselves all over the country on festival bills alongside acts like Twenty One Pilots, X Ambassadors, YUNGBLUD, lovelytheband, & more.

This indie pop musical catch brings together soaring vocals, driving guitars, and sizzling synths for fun, bright bops with a sophisticated edge. She takes influence from groups like Portugal. The Man, Dua Lipa and Bishop Briggs and brings us high energy with snappy beats and thumping bass lines.

Growing up in a musical family, Cat has always had a strong connection to music expression and learned to play violin and piano at an early age. She was classically trained for 18 years, spending time in orchestral productions, jazz bands, and in the theatre. Hailing from the Washington, DC music scene, she is surrounded by incredible musical diversity that influenced her eclectic musical style.

Cat is the winner of the 2019 Washington Area Music Award for Best Rock Artist in the Washington, DC metropolitan area.  Her music has been featured by Netflix and ABC for her song “Pricey” and is set to release her debut album in early 2022.