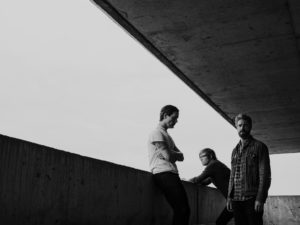 The music made by METZ, Alex Edkins (guitar & vocals), Hayden Menzies (drums) & Chris Slorach (bass) has always been a little difficult to pin down. Their earliest recordings contained nods to the teeming energy of early ‘90s DIY hardcore, the aggravated angularities of This Heat, & the noisy riffing of AmRep’s quintessential guitar manglers, but there was never a moment where METZ sounded like they were paying tribute to the heroes of their youth. The sonic trajectory of their albums captures the journey of a band shedding influences & digging deeper into their fundamental core—steady propulsive drums, chest-thumping bass lines, bloody-fingered guitar riffs, the howling angst of our fading innocence. With Atlas Vending, METZ not only continues to push their music into new territories of dynamics, crooked melodies, & sweat-drenched rhythms, they explore the theme of growing up & maturing within a format typically suspended in youth.

Covering themes such as paternity, social anxiety, addiction, isolation, media-induced paranoia, & the restless urge to leave everything behind, each of Atlas Vending’s ten songs offer a snapshot of today’s modern condition & together form a musical & narrative whole. The result is a record that sounds massive, articulate, & earnest. Bolstered by the co-production of Ben Greenberg (Uniform) & the engineering & mixing skills of Seth Manchester (Daughters, Lingua Ignota) METZ deliver the most dynamic, dimensional, & compelling work of their career. 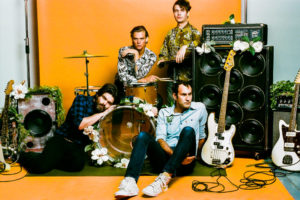 Preoccupations’ songs have always worked through themes of creation, destruction, and futility, and they’ve always done it with singular post-punk grit. The textures are evocative and razor-sharp. The wire is always a live one. But while that darker side may have been well-explored, that’s not quite the same as it being fully, intensely lived. This time it was, and the result is ’New Material’, a collection that broadens and deepens Preoccupations to a true mastery of their sound. In it lies the difference between witnessing a car crash and crashing your own, between jumping into an ocean and starting to swallow the water.

“It’s an ode to depression,’ singer Matt Flegel says plainly. “To depression and self-sabotage, and looking inward at yourself with extreme hatred.”   Typically resilient, the months leading up to recording ‘New Material’ brought a new order of magnitude to feelings that had been creeping up on Flegel for some time. He’d written bits and pieces of lyrics through the course of it, small snippets he hadn’t assigned to any one thought or feeling but were emblematic of a deeper issue, something germinating that was dense and numb and fully unshakeable.  As the band began writing music, that process gave shape to the sheer tonnage of what he’d been carrying.  With virtually nothing written or demoed before the band sat down together, the process was more collaborative than before.  It was almost architectural, building some things up, tearing others down to the beams, sitting down and writing songs not knowing what they were about. But for Flegel, it led to a reckoning.  “Finishing ‘Espionage’ was when I realized,” says Flegel. “I looked at the rest of the lyrics and realized the magnitude of what was wrong.”

‘New Material’ builds a world for that feeling, playing through its layers and complexities while hiding almost nothing. That inscrutable side is part of the magic, here, and a necessary counterweight to the straight-jab clarity of Flegel’s lyrics. You can deep-dive the lyrics or zone into a riff; you can face it or you can get lost in it.  “My ultimate goal would be to make a record where nobody knows what instrument is playing ever,” says multi-instrumentalist Scott Munro, “and I think we’ve come closer than ever, here. It shouldn’t sound robotic — it should sound human, like people playing instruments. It’s just maybe no one knows what they are.”

Opener “Espionage” lives up to Munro’s goals, kicking off with a clattering, rhythmic echo that gives way to sprinting percussion and a melody in the orbit of Manchester’s classics. “Manipulation” explores the futility of going through the motions, balancing a droney, minimal march with a thunder roll that brings it to the brink, and to the doomed romantic declaration, “please don’t remember me like I’ll always remember you.” “Disarray” bursts up like a blackened confetti cannon, the song’s undeniably bright melody dancing over a refrain of “disarray, disarray, disarray” and literally nothing else.  “A lot of this is about futility,” he says, “trying to find something where there’s nothing to be found.” That hunt turns into a search-and-destroy mission on “Decompose”, a tense, speedy, “blow yourself up and start again” type of song, the very picture of creation and destruction, as Flegel writes “for better or worse, we are cursed in the ways that we tend to be.”  And while calling an album ’New Material’ might seem like a smartass move, the truth is it’s as matter-of-fact a title as Espionage, Disarray, or anything else on the record.  Why fight that?

If the through-line unifying Preoccupations’ work is a furious, almost punishing cyclical quality, ‘New Material’ does offer some relief.  “This is somehow the most uptempo thing we’ve ever done,” observes Flegel. That propulsive, itchy quality rescues ‘New Material’ from the proverbial bottom of the pit. To write these songs is to force oneself to reignite, to play them is to stand up and reengage. Closer “Compliance” may not seem revelatory on first listen, but it is deeply elemental, a crucial finale and the band’s first standalone instrumental. Original versions were built to death, reexamined and re-destroyed until they landed on just two chords — something simple, fundamental — and resolved to make meaning out of that, to show instead of tell. Flegel acknowledges it is more affecting to him than any other song on the record. It’s not redemption, more like a forced reprieve.