Fucked Up – David Comes to Life Tour + Pony + End It

I was sent an unfinished version of Dose Your Dreams so that I might contribute string parts. I couldn’t stop listening to the rough mixes I received. A friend asked me how the record was. I replied, “My God, Fucked Up have made their Screamadelica.”

And psych-rock-groove it is. The drums mixed wide, propensity for drones, for delay pedal, for repetition, groove. The politics and aesthetics of hardcore married to an “open format” approach to genre. Elements of doo-wop, krautrock, groove, digital hardcore.

“None of Your Business Man” opens the album in familiar enough territory, a sax-assisted exit from an office space. But things get psychedelic very quickly. By the time the title track arrives, Mike Haliechuk is whispering, wah pedals are in full effect, and we’re wearing oversized t-shirts and pinwheeling. “Accelerate,” the lyrical centerpiece of the album, storms in like Boredoms on a bullet train and dissolves into a digital nightmare. The album closer, “Joy Stops Time,” finds Fucked Up at their most Düsseldorfian, nearly eight minutes of blissful motorik.

At the center of it all is Damian Abraham’s scream—a man chained, a man tortured, a true protagonist. The effect is one of an epic, every chapter attempting its own narrative devices, its own genre hybridization—and it works, it works so insanely well. The drama unfolds like a miniature world of many parts being explored, a map being illuminated, location by location.

As with David Comes to Life, there is a story here. David—who once came to life—is now indentured to a desk job. David meets the elderly Joyce who closes his eyes, opens his mind, and sends him on a spiritual journey. David embarks on his own metaphysical odyssey. He sees a stage adaptation of his own life. He speaks to an angel in a lightbulb. He sees an infinite series of universes as simulations within simulations.

Meanwhile, Lloyd—Joyce’s lover—was sent, decades ago, by Joyce on the same odyssey, but was lost in the void. Lloyd seeks to be found and reunited with his lover. Where will David end up? Will Joyce and Lloyd be reunited?

Dose Your Dreams—meaning: treat your dreams as you would a dream, allow yourself to be lost within them, allow them to open your heart and your mind, enjoy them as you would a drug. Reach out for my hand and pull me close. —Owen Pallett 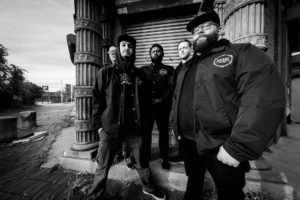 END IT walks the path that their Baltimore forefathers paved. Musically influenced by Gut Instinct, Maximum Penalty, and Absolution, while also paying homage to New York’s Neglect, END IT are sonically reminiscent of the golden era of that harder early 90’s east coast sound and with lyrics that are unapologetically real and influenced by the likes of Neglect and Next Step Up. The quartet is a vital reminder of a better time, a time when it wasn’t about trends or industry connections; a time when the music was raw, unpolished aggression that spoke for itself.

One Way Track displays a more mature and focused band, due largely to a change in perspective provided by major life changes that the band members have recently experienced, including fatherhood. However, these recent developments have not tamed the band in any way; in fact, they are more in touch with their surroundings than ever before, and express their mentality with an urgency and aggression that is sorely missing from today’s hardcore scene. “These are basically Baltimore Hooligan Anthems,” says vocalist Akil, and aptly so — the brash punk attitude of their 2017 demo is doubled down upon on One Way Track, and combined with a hardcore intensity that pushes the band’s sound closer to the extreme end of the genre. END IT are disturbing the peace of the commercial hardcore scene by providing an fast, loud, and unapologetic snapshot of the city that raised them.