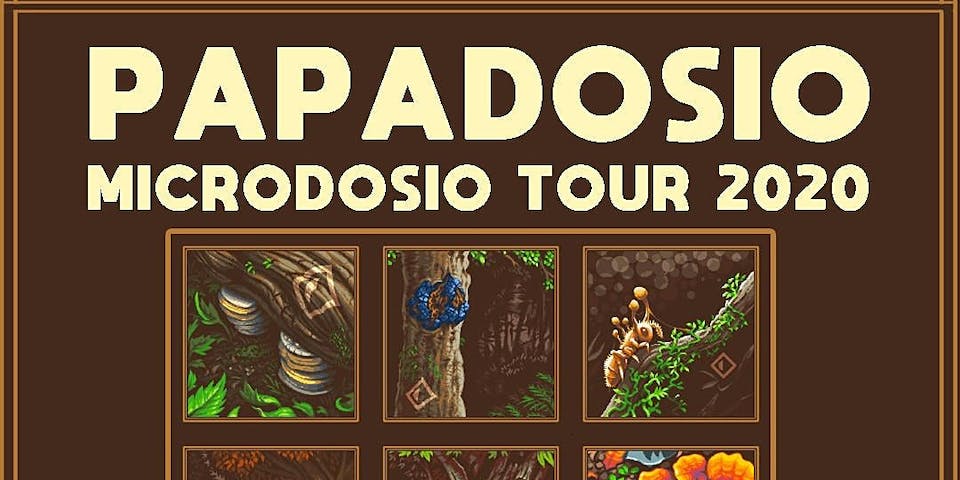 Falling somewhere between rock, jazz, and electronic mayhem we find Papadosio striving to create music that is strangely familiar, and calls all walks of humanity to bask in a unique experience celebrating the one constant in an ever-changing world: music.

Papadosio has packed out Red Rocks Amphitheater for headlining shows the past two years running and now they bring their music to smaller stages on a tour of more intimate performances. Characterized as a dynamic progressive rock band, Papadosio creates the sound of new-age technology merging with mesmerizing instrumentation. Between the unfamiliar melodic sound and the element of production, their live show will leave you wanting more.

JAW GEMS, an electronic outfit from Portland, Maine, is a collective of experimental producers bringing beat-music – traditionally programmed and played on samplers – to a live band setting.

Combine legendary beat-makers like Tokimonsta, Flying Lotus, and Dilla, with the deep gritty grooves of Thundercat, and Toro y Moi’s chillwave synth-pop, and you begin to approach the sound Jaw Gems creates. Since their start in 2009, the band has been exploring sonic and rhythmic ideas that emphasize interlaced melodies and hard-hitting slaps. The result is a harmonic workout for both the subconscious and neck.

Electronic producer, Daedelus, says “Jaw Gems have done the magic trick of delivering thoroughly listenable instrumental [albums] that you can also sing along to.” Outfitted with vintage, analog synthesizers sampled through a modern Roland sp404, a live drummer, and an electric bassist, Jaw Gems’ employ a variety of beat-repeating, sample-warping technology to design a sound which is commonly made by a solo artist.

It’s this unique technique that caught the attention of acclaimed producer Daddy Kev, founder of Alpha Pup Records — home to many of the aforementioned artists. “I fell in love with Jaw Gems the first time I saw them perform,” says Kev. “I think they’re a perfect fit for the Alpha Pup label.”

Jaw Gems will unleash a sonic spark in the shadows with the release their fourth album, Dim Kingdom, on Alpha Pup this March — Following up their recent works Heatweaver and Heatweaver Remixes with a big, expanding sound, and an intimate, calming intensity. Inspired by the band’s mood regarding the current state of America during recording time, Dim Kingdom represents a shifting stance for the group.

“With this album, we searched to try and find some light in the darkness” explains keyboardist Tyler Quist. “Considering the events of the past two years, it’s not hard to detect a general feeling of low morale in the country. We made this music in the hopes that it could lift us and others during this time.”

Two years spent touring has also affected Jaw Gems’ musical style with optimism and a powerful lucidity, as they saw their performance environment change drastically from intimate settings to much bigger venues, including Red Rocks Amphitheater.

“Playing our music on these stages with increasingly larger sound systems enabled us to craft songs to fit that territory.” shares drummer Dj Moore. “With Dim Kingdom, we were motivated to explore that inspiration and apply it to our sonic palette.”

In addition to national tours and landing their dream record deal, other recent Jaw Gems’ highlights include shared stages with icons such as My Morning Jacket, Flying Lotus at L.A.’s legendary Low End Theory (FlyLo’s first appearance at the famed L.A. beat scene event in years), Pharoahe Monch, and many more.