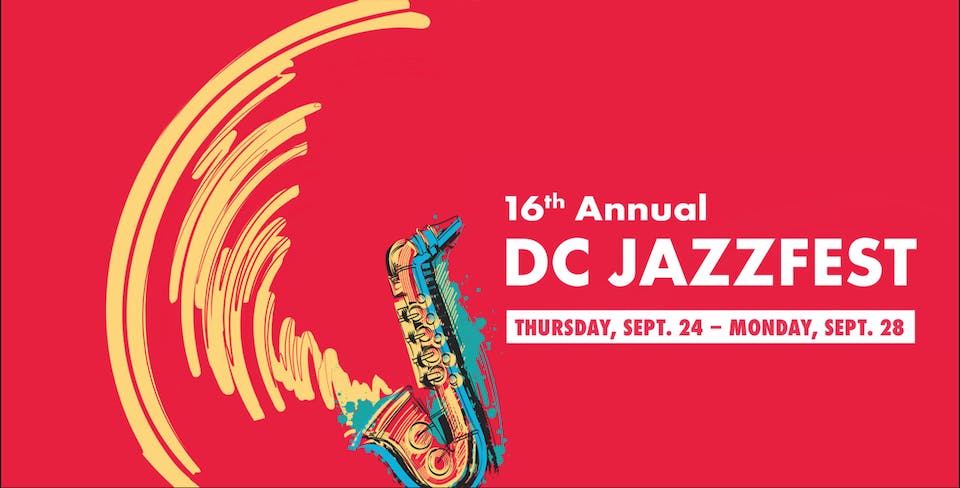 The DCJazzPrix™ is an annual competition that brings together standout talent from around the world for a night of unforgettable performances. Unlike other performance-based contests, the DCJazzPrix™ puts a great deal of emphasis on the essential interactions between band members and recognizes these relationships as the core pursuit of the jazz aesthetic. Jazz, blues, R&B, and bounce bands from around the world are encouraged to apply. RSVP on Facebook and get ready for an unforgettable finale!

The DC Jazz Festival® (DCJF) is proud to announce the five bands selected by our panel of expert judges as the 2020 DCJazzPrix™ Finalists, all of whom will perform virtually on Sunday, September 27th at the DCJazzPrix Finals at Union Stage, 740 Water Street SW, as part of The 16th Annual JazzFest. They are:

London-based saxophonist-composer, dubbed “The Golden Girl of Jazz” by the Evening Standard, she began playing at age 11. Ms. George achieved her Masters in Jazz at Trinity College of Music. Since then she has worked with the acclaimed London young artist ensemble Tomorrow’s Warriors, and the New Civilisation Orchestra. In 2009 she joined Jazz Jamaica, and in 2014 she joined saxophonist Courtney Pine’s all-female ensemble Venus. Her debut recording was “Isang” on Ubuntu Records.

Based in Durham, NC this cooperative band includes Ittai Korman on bass, Theous Jones on drums, Serena Wiley on saxophone, Joe MacPhail on keyboards, and Lynn J. Grisett, Jr. on trumpet. DreamRoot specializes in their brand of political jazz and neo-soul. They incorporate African and European elements in their music. Their debut release is “Phases” (2020), from which they have released two singles: “Stay” and “Stridin’”.

DC-based saxophonist-composer-bandleader, and bassist Elijah Jamal Balbed leads The EJB Quartet. EJB, who attended Howard University, and University of the District of Columbia to study music, is an award-winning artist, cited by Washingtonian Magazine, and the Washington City Paper. In addition to his jazz experience, EJB joined go-go pioneer Chuck Brown’s band in 2011. Since Brown’s passing, EJB has continued to perform with the Chuck Brown Band, as well as develop his popular jazz-meets-go-go band the JoGo Project.

A cooperative trio, consisting of pianist Michel Reis, bassist Marc Demuth, and drummer Paul Wiltgen, three of Luxembourg’s most promising jazz musicians. They formed their trio in 1998 as high school students. Since then they’ve separately studied at top conservatories, including Berklee College of Music, Manhattan School of Music, and the Koninklijk Conservatory in The Hague. In 2018 they toured Europe with guest saxophonist, the acclaimed Joshua Redman. Their third album release is 2018’s “Once in a Blue Moon”.

A Connecticut native, this saxophonist-composer has been immersed in the challenge of the saxophone-bass-drums trio format which he formed while studying at the Jackie McLean Institute of Jazz. Shortly before graduating in 2015, he was selected for the prestigious Betty Carter Jazz Ahead residency (led by Jason Moran) at the Kennedy Center. Months later, he began playing with Marc Cary's Harlem Sessions collective. His next adventure took him overseas for a yearlong master's abroad in Contemporary Performance/Music Production at Berklee's Valencia program in Spain. Casey has gone on to perform at prestigious venues stateside & internationally leading his own band, such as Jamboree, Jimmy Glass, Le Jam, Auditori Nacional, Future Music Forum, BRIC Jazz Fest, The Philadelphia Museum of Art, and The Kennedy Center. This October 2020, he releases his debut studio album Law of Attraction, with Benito Gonzalez joining his trio on 3 tracks.

The five finalists have been chosen by a prestigious and well-qualified jury to compete at the 2020 DC JazzFest in front of an enthusiastic virtual audience in their pursuit of the Grand Prize of $15,000. The winning band will begin a year-long association with DCJF to include: extensive publicity; customized business development and career impact services; a (paid) New York City engagement in the 2020/2021 season at Tribeca Performing Arts Center (TPAC) as part of TPAC’s annual Jazz In Progress Young Artist Series; and a highly visible 2021 DC JazzFest engagement with commensurate compensation.