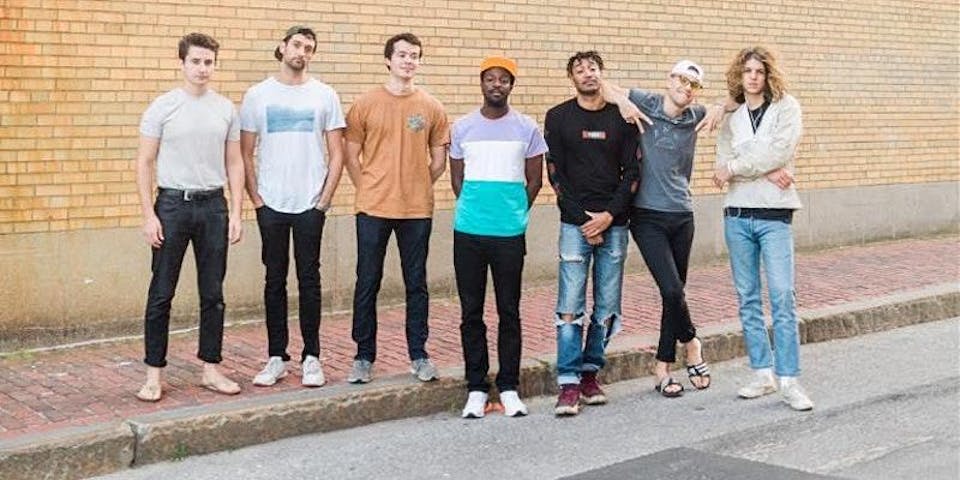 “There are so many colors when we play,” explains Michael. “The chemistry is there in the studio and on stage. When we play to a crowd, it’s all organic. The reactions... the faces... the experience, what you see is what you’re getting, people know that, they can tell. We’ve learned to listen to each other and to what the music has to say. At the same time, we channel our youth, there’s no bottling that up. We’re always searching for something tangible our listeners can thoroughly feel at the core of the music. We’re trying to create an atmosphere much bigger than the seven of us on stage.”

It was evident from the band’s beginnings that this collective potency could contribute to something far greater, and something truly different. After meeting as freshman at Boston College, Juice became unified upon winning their school’s “Battle of the Bands” in 2014. Soon after, things got serious.

Through constant gigging Juice honed their live performance, displaying an original raw energy. Soon, Juice went from frequent gigs at the city’s famed Middle East to selling out East Coast hotspots such as Brighton Music Hall, Mercury Lounge, Rockwood Music Hall, and more. Releasing their full-length debut in 2016, the band landed a viral hit in the form of “Gold,” which popped up on countless “Discover Weekly” playlists and cracked over 386,000 Spotify streams without any traditional promotion.

Hitting Summerfest Milwaukee for the first time in 2016, Juice impressively won the grand prize at of the festival’s “Land The Big Gig” Competition. Graduating from college a year later, the musicians returned to the annual festival and opened for pop juggernaut DNCE.

Along the way, they carefully sharpened their style, merging virtuosic musicianship and vivid songwriting. “The hardest question for us to answer is always who do we sound like. We have so many influences from so many different places. When it all falls together, we end up with songs that are honest, songs that we love, songs people remember...but songs that don’t sound like anyone else” explains Michael.

“It’s a combination of so many things,” says Rami. “Everyone hears their own impression, first you might hear the violin, then the soulful, dynamic vocals, and then the melody driven guitars, all of which is anchored by our prominent rhythm section.”

After meeting GRAMMY® Award-nominated producer Johnny K at Summerfest, the band headed to Milwaukee in 2017 to record their upcoming project. Now, they introduce this collection with the soaring single “Sugar.” Hummable funk guitars lay over a steady groove before the chantable hook—“I cannot get by without you honey”—takes hold. Airtight raps and radiant chorus harmonies drive the song into the bridge before an old school rock n’ roll guitar solo gives way to stomping handclaps and gospel-style backing vocals.

“On the surface, you can think of ‘Sugar’ traditionally like buying into lust, it’s an insatiable feeling” explains Michael. “It does go a little deeper though. At our age, we experience elements of this vanity culture in high concentration. It speaks to that. There are also elements of temptation in there, but at its core, it’s some youths taking a crack at a bright rock ‘n’ roll record.”

Clean guitars unfurl amidst flourishing violin and delicate crooning on the heartfelt “Workin’ On Lovin’,” which culminates on the admission, “I need someone to love.” Dreamy piano shuffles into a young love confessional on “September Told Me.”

Then, there’s “Heartbreak In A Box.” An honest statement about “holding onto feelings after they’ve left your life.” Michael adds, “Sometimes sorrow and pain are the medium in which we recall feelings of joy.”

“It’s a good feeling to give listeners something honest, it teaches you a lot.” Michael leaves off. “You hope someone gives your music a chance, you hope that they might feel something you once felt and make it their own, have their own sensations. We work hard to deliver that”.