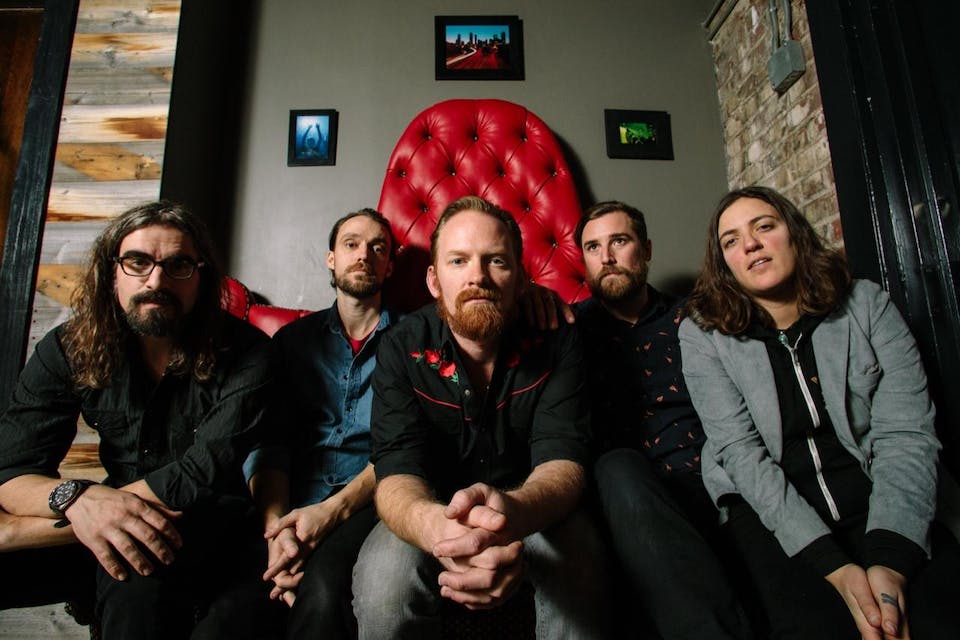 Fruition’s newest album, Wild as the Night, conveys the emotions of our darkest, and sometimes weakest, moments. Influenced equally by acoustic music as well as rock ‘n’ roll, the eclectic, after-hours vibe comes naturally to the Portland, Oregon-based band, composed of Jay Cobb Anderson (electric guitar, vocals), Kellen Asebroek (piano, acoustic guitar vocals), Jeff Leonard (bass), Mimi Naja (mandolin, electric guitar, vocals) and Tyler Thompson (drums). Their unmistakable vocal blend first revealed itself in 2008 when Anderson tagged along with Asebroek and Naja for an afternoon of busking in Portland. Since that time, they have opened shows for the Wood Brothers, Greensky Bluegrass, and Jack Johnson, and at appeared at festivals like Telluride Bluegrass, Bonnaroo, and DelFest. Wild as the Night follows the band’s acclaimed Tucker Martine-produced 2018 album, Watching It All Fall Apart.

Lindsay Lou has been making soulful, poignant music for the last decade. An undeniable powerhouse, Lou’s remarkable gifts as a singer, songwriter, musician and performer demand the listener’s attention. Her singing floats over the masterful playing and deep groove of her band with both a fierce intensity and a tender intimacy.

The beauty with which the sounds on Southland slip into the ether is the product of an emotionally difficult time for Lindsay and her band—who, as musicians often do, entered the studio to “hash it out.” The process, demonstrated by the music on Southland, was sincere and stirring and introspective.

Southland kicks off with “Roll With Me,” an expansive anthem with Lou’s robust vocals on full display. “Go There Alone” was written during an “Immersion Composition Society” experiment that Lou does from time to time, and the sound fully developed with the band a little later on. The lazy, beautiful harmonies pull at your heartstrings in a way that feels like home, despite the lonely and bittersweet message. And though songs like “The Voice” and “Southland” were spurred on by more abstract ideas and words, they transformed as collaborators started freestyling with their instruments and Lou simply sang what came to mind. Impressively enough, Lou plays electric bass, electric guitar, and acoustic guitar on the album’s title track. “Southland” is about the natural beauty of the South, which to Lou, adds a sense of calm and connectedness to a region known too often for its divisiveness. Having recently left her home state of Michigan to put down roots in Nashville with the band, the influence of this change is felt throughout the themes and ideas expressed on Southland.

Born the daughter of a coal miner in middle Missouri, Lindsay Lou’s family moved to Michigan shortly after Lindsay was born. She describes her family as close knit and musical, their lives influenced heavily by her maternal grandmother’s radical ideals and zest for life. In fact, if you ask Lindsay, her grandmother—a woman who was once put in jail during the Civil Rights Movement for teaching a lesson on the “f” word as a high school literature teacher—is one of her greatest influences to this day. Armed with her activist spirit, Lou’s grandmother set up a Christian commune in Michigan’s Upper Peninsula for her growing family of twelve, as well as some stragglers. There in a big farmhouse, Lou’s dad was their neighbor.

Raised with this sense of community, Lou recalls always being surrounded by music. So when the time came for her to join a band, for Lou, it felt like finding a home away from home. Her career, like her life, have been full of great moments of kismet. As a youth, Lou built her repertoire by practicing her vocals, and she picked up the guitar so she could play with her Uncle Stuckey, perhaps most musically influential on her of her mother’s siblings. The skills she honed during the days of learning to sing and play with her family led to a wide variety of musical opportunities, singing in choir in high school, attending an elite summer program at Interlochen on scholarship, and winning awards for her talents.

Today, touring nationally and internationally year round, Lindsay Lou and her band continue to collect a mass of friends and fans along the way. Notable U.S. festival plays include Telluride Bluegrass festival, Merlefest, Stagecoach, Redwing, ROMP, GreyFox, and a slew of others. Abroad, they have appeared at Scotland’s Shetland Island Folk Fest and the Celtic Connections tour, Australia’s National Folk Festival, and others. The Boot, who featured Lindsay Lou Band as a “Can’t Miss Act at AmericanaFest 2018, says “...Lou brings introspection and masterful vocal work to her live show.”

In the words of famed bluegrass musician David Grier, who caught Lindsay Lou Band at a recent festival, “Lindsay...sings the way you would want to if'n you could. Phrasing, tone, emotion, it's all there. Effortless seemingly. Simply mesmerizing. Riveting! Don't miss the musical force that is Lindsay Lou.”