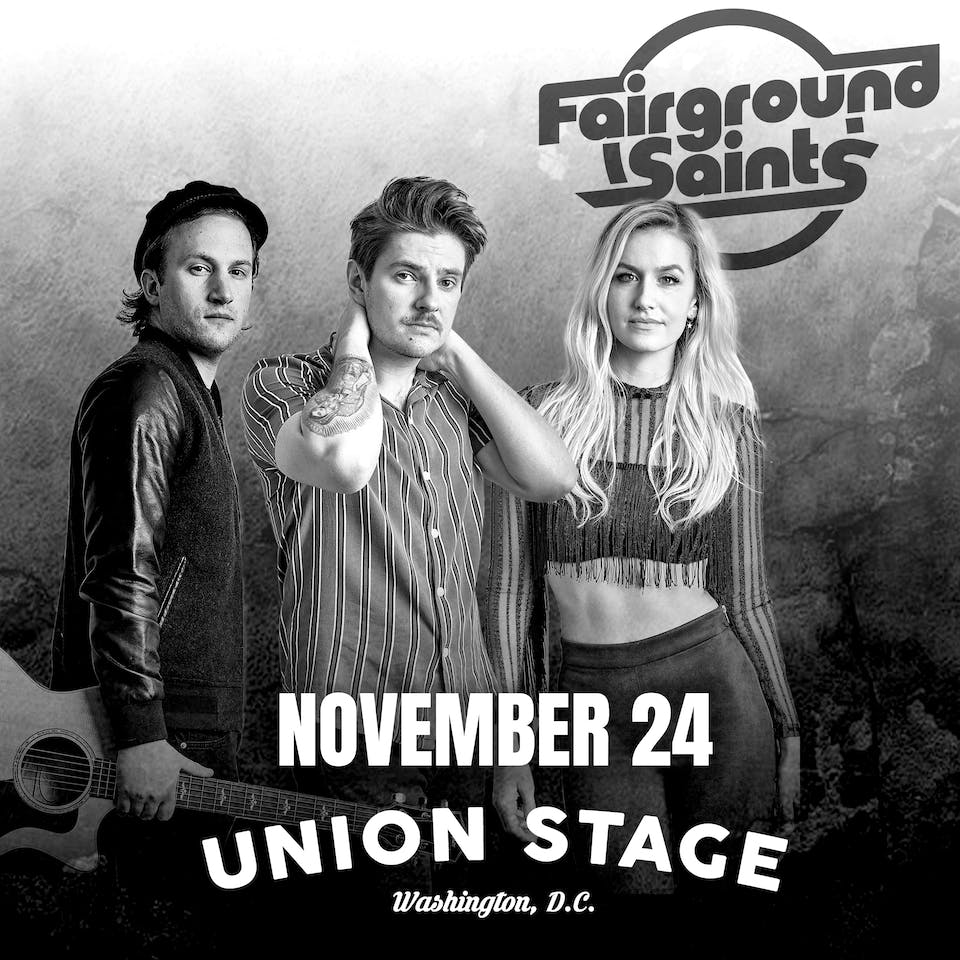 Santa Barbara born and now Nashville based trio Fairground Saints create their warm and wistful sound by playing off the delicate contradictions at the heart of their music. Their unique California country sound, layered three part harmonies and solid musicianship is impressive beyond their years. With each member sharing songwriting duties, Mason Van Valin and Elijah Edwards impart a starkly literate, sometimes-gritty sense of introspection informed by artists like Bob Dylan and Jim Messina, while their fellow vocalist Megan McAllister lends a soulful vulnerability and gutsy intimacy inspired by everyone from Shania Twain to Stevie Nicks. “We each bring in our own different elements, but what connects us is the level of honesty that we go for in our songs,” says McAllister. And in achieving that honesty, Fairground Saints infuse their music with intense emotional power. “All of us in the band believe in being as real as possible with our music, and not shying away from wherever a song is trying to take us,” Van Valin says. Fairground Saints’ easy chemistry and a shared sensibility feels beamed in from the golden era of singer-songwriters.

Integrating influences from old country greats such as Townes Van Zandt and John Prine, to the sonic rock explorations of Jeff Tweedy, Peyote Pilgrim has been making music in the DC area since 2013. Childhood friends Casey Shannon and Davey Hoen formed the group originally as a simple lo-fi project, but joined forces with drummer Jack Kilby and guitarist/pedal steel Ian Dansey in 2015. Peyote pilgrim refined their vision over the course of two albums (In a town so green I can’t be blue, and Cowabunga), and solidified their eclectic americana sound on their 2017 EP Americana Hotel, anchored by Ian Dansey’s pedal steel melodies, and Casey Shannon’s poetic lyrics that cover classic themes of love and loss, to the not so classic themes of gentrification and immigration. Peyote Pilgrim is a little folk-rock and a little blues-country. It’s unadulterated Americana and a whole lot of heavy soul.

Singer-songwriter Luke James Shaffer’s story is the kind of yarn that packs an anthemic dose of rock n’ roll romanticism. Seven years ago, Luke was toiling away as a server in a restaurant, longing to be a full-time singer-songwriter. In one moment of fevered enlightenment and hope, he turned to his friend and co-worker and asked if she thought he should pursue his dream. She said yes (by the way, that wouldn’t be the only time she said yes to a crucial question—the two are now married).

Today, Luke is basking in a new era of unbridled creativity and unbounded possibility while enjoying a familial partnership with House Music Group. His exhilarating, Bourbon Street-spiked first single “Pressure,” from his debut EP (with HMG), also titled Pressure, rocketed to the Top 20 on the iTunes singer/songwriter charts in January 2018. Luke has also amassed a robust YouTube audience with his live-looping cover videos and intimate renditions of popular songs, garnering over 1 million views.

The key to his success? “I always strive to create positive vibes because life is beautiful even when things aren’t beautiful,” the Washington, DC-based artist says.

Recent career highlights include partnering with the Global Mental Health Alliance on his song, “We’re All a Little Crazy,” which reached the Top 50 on the iTunes singer/songwriter charts and amassed over 60,000 spins on Spotify in just 3 months. A portion of the proceeds for this track will go to the Foundation. Luke also wrote and recorded the single “Cliff Dive” with bassist Austin Bello (Forever the Sickest Kids) which was picked up by The Travel Channel and featured on the show Expedition Un- known.

Past career highlights include making it to the Top 50 candidates on American Idol two years in a row; being cast on the web-based reality show Take The Stage with music manager Johnny Wright where he placed third, earning him an opportunity to work with LA-based producer Rodney “Darkchild” Jerkins (Michael Jackson, Beyoncé, Lady Gaga); and playing Madison Square Garden with an agency cover band.

As a singer and songwriter, Luke puts forth sweet and soulful enlightenment with a purity of expression that extends to his decision to never use auto tune. “My music comes from the heart—I say the things in a song I can’t say any other way. I love to tell stories, and I believe there should be truth and honesty in music and lyrics,” he shares.

Luke grew up in Ohio, and, as a child, was painfully shy—his mother had to indulge his love of singing through gently nudging him to join choir. Even though his father played guitar growing up, Luke didn’t really listen to music until he started playing it himself on a guitar he and his two brothers got for Christmas. Isolated from many kids his age through being home schooled, his musical world were the sounds he heard at home. One sound he didn’t like to hear at home was his younger brother growing more proficient on the guitar than he. “As an older brother, I just couldn’t have that,” Luke states. So, as a late bloomer at 18, Luke started playing and writing songs and fell in love with the expressive possibilities of songwriting

In pursuit of his passion, Luke moved to NYC after graduating college. For 2 years, he continued to write and play music, while waiting tables to pay the bills. After money got tight he reluctantly made his way back to Ohio to work at an old restaurant he waited tables at as a college student. That is where and when Luke made the fateful decision to give music one more shot. To this end, he moved to DC and signed up with an agency and began making a living singing cover songs. In joining forces with House Music Group in 2018, he found a platform that would nurture his gifts as an artist and support him in the decision to focus on only original music full-time. “They have faith in me. This is a big step that I don’t take lightly,” he says.

Pressure represents a culmination of a creative partnership with House Music Group producer/songwriter Daniel Strauch. The songs on the EP came together, as Luke says “pesticide free,” meaning they were created organically. The pair cherry picked a cohesive five-song collection for the EP’s rousing and redemptive roots rock aesthetic.

The EP’s first single is the invigorating gospel-infused pop-rock title track which boasts spiritual uplift, anthemic hooks, and heaps of soul. “That song is a reminder that there is only so much we can control, and, if things don’t go the way we plan, it’s not the end of the world, it’s just life,” Luke shares. The single will be paired with an animated video that addresses bullying issues in high school in a sharply insightful and entertaining way. Pressure’s second single will be “How Sweet The Sound,” a storyteller romance that glows with vintage soul touches like a Hammond B3 and smoldering grooves.

Luke is on the precipice of fulfilling his dream of doing original music full-time. Up next, he will tour behind his EP and record its follow-up release. “There is a lot of pressure associated with this,” he acknowledges with a sly pun. “But I have a strong faith in everything we are doing. I have the attitude that when you put the hard work in, believe in yourself and your team and manifest a positive outcome for your life, things will work out.”

Wed Aug 5 More Info
Union StageWashington, DC
On Union Stage
Get a FREE LIMITED EDITION t-shirt when you order $75 or more worth of tickets!Click here for details!
+